M4K Lynchburg improves the quality of life for local children through individual fundraising, partnering with local charities and businesses, and having a little bit of fun with facial hair.

M4K Lynchburg is a volunteer-run organization with the goal of raising money for local children’s charities while having fun growing mustaches. In 2014 Chris Boswell and Lanny Duncan recruited 32 guys in Lynchburg to grow mustaches for a great cause. Seven years later we have over 160 “growers” and have raised over 1 MILLION dollars for the children of Lynchburg. We plan on making 2021 our best year to date with a goal of $350,000!!

We would like to send a big thanks to M4K Richmond for getting us started and all of their guidance along the way.

Here's how it works: Each year, during the four-week Growing Season spanning November and December, Growers sprout sweet, sweet Mustaches. Per Mustaches for Kids bylaws, they shave their faces, except for the Mustache, a minimum of one time per week and solicit donations from friends, family, co-workers, and people in the community. Kind of like getting pledges to run a marathon. Without the exertion, cramping, or dehydration. Call it a facial hair marathon.

At the end of the Growing Season, the Growers hold a Mustache Competition called the Stache Bash, which is a cross between a beauty pageant, dog show, and police line up. During the Competition, Growers, often in Mustache-enhancing costumes, are put through a test of mind, body, and Mustache and allow their facial hair to be evaluated by an independent panel of judges, and one Mustache is declared to be the "Sweetest.." 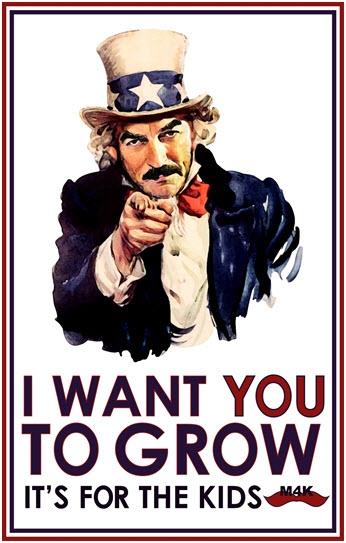 The registration are currently closed. Please contact the organizer for further information.